We had forgotten how wonderful Paris can be. 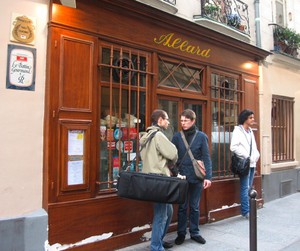 For too many years we had been driving around the city but not into it during our travels in France. This time we stopped.

The first time I saw Paris nearly a half century ago I was stunned by its beauty. The City of Light still delights. That’s the fabulous thing about Paris. No matter how many times you visit or how many decades have passed, touchstones remain.

Though we once briskly walked kilometers in pleasant abandon, we now sauntered at a more elderly pace taking note of the changes along the Seine, in the area of the old Les Halles or down Saint Germain, and of that which remained untouched.

The legendary existentialists no longer inhabit Deux Magots at the cultural crossroad,  yet its sidewalk tables are still a splendid place to sit and sip while watching the passing parade of young sophisticates in high heels, tossing their curls while smoking and texting or an old man struggling against traffic trailing the ribbons of a bountiful bouquet.

We took comfort in the familiarity of Paris and savored its tastes of yore, lingering over a meal at Chez Georges where ris de veau and rognon were perfectly cooked. At Allard, the rooms were redolent of the aromas of the day’s offerings, the color of the walls reminded of the heady times when smoking was de rigueur and the boeuf bourguigon melted in the mouth just as it should.

We were exhilarated by discovery of sites new to us including the appealing Mouffetard Market on the cobblestone Sainte Geneviève Hill in the 5th arrondissement.

It was a pleasure to rest near the jardinières of cascading flowers in the Jardin du Luxembourg watching children learning to balance on scooters, to contemplate the grace of the palm pillar at Saint Séverin, to amble through French history in the Conciergerie and Carnavalet, to see Sainte-Chappelle once again and wander along the Beaux Arts-lined avenues in this city where natural light still filters down to its pavements.

Then there was the magical morning at the Musée National du Moyen Age, an oasis of calm and beauty steps away from Boulevard Saint-Germain-des-Prés at 6 Place Paul Painlevé. Here in the 15th-century castellated Paris residence of the Abbott of Cluny, nestled against one of the city’s largest Roman remains, are housed the six tapestries which comprise “The Lady and the Unicorn” series celebrating the five senses. Woven in the Low Countries six centuries ago, they are as familiar as a greeting card, journal cover or needlework pillow, but to see them in all their vivid color, divine detail and amusing whimsy is a gift. 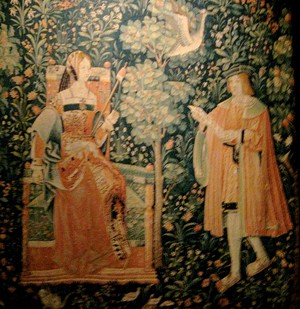 One can only imagine the conditions under which each thread was woven to create the the scarlet and lapis fields, hairs on the hares, the texture of her dress, the smile on the lion or the devotion of the unicorn.

One can only be grateful that in 1841 Prosper Mérimée visited a château in the Limousin,  recognized them in their less-than-ideal conditions and enlisted Georges Sand’s support to bring them to Paris.

La Dame à la Licorne would more than justify a visit to this museum were there not so much more on its two floors, in its Roman frigidarium and amidst its rear gardens.

There are fascinating fragments of Gothic portal sculpture from Saint Denis, Sainte-Chapelle and now Notre Dame.  Destroyed and discarded after the Revolution, parts of original sculpture from the most famous cathedral were found only in 1977 shoring up the foundation of a nearby bank. They now perch on pedestals in the first-century frigidarium.

The abbot’s monastery at Cluny is long since removed, but his former rooms in Paris are filled with ivories, Limoges enamels, stained glass, jewelry, silver, a 13th rose fashioned in gold and even the reputed umbilical cord of Christ which has its own reliquary.

Domestic life in the Middle Ages is remarkably represented as well by a wooden shutter carved as drapery, a rare painted table top, a flared goblet from Amiens, a niello spoon and an item only a silver scholar could love — a copper plate bearing the marks of silversmiths working in Rouen in 1408.

Church and laity converge in the corridor leading to Room 15 where a rare, large and beautifully formed bronze container could still take fine measure of tithes.

A coffered room on the first floor is devoted to another series of tapestries, this one depicting the life of St. Stephen including his stoning. The story is rich, the figures are imposing, the needlework is strong, but the beauty of La Dame à la Licorne surpasses all.

In a nonce we had moved through two millennia of Parisian history as we took lunch nearby in the stunning Art Nouveau room of Racine, one of the city’s famous bouillons — 19th-century restaurants which served a hot meal at good value — a far cry from the fast food chains of today and far better as well.

One last errand remained — a quick excursion to seek help syncing devices at the shiny Apple store in the bowels of the Carrousel du Louvre.

That’s the wonderful thing about Paris: while it is ever changing, it never changes. Where others destroy and obliterate, the City of Light absorbs and conserves its history while still moving on.

Please visit our Amazon affiliate store [1] for your shopping. Bonjour Paris has hand-selected some of our favorite travel gifts and gadgets for our readers… plus many Paris- and France-related books for children, travelers, scholars, and dreamers.

If you’re coming to France and want to remove the stress out of any and all planning, dynamo Lisa Buros-Hutchins of www.YourParisExperience.com [2]can arrange anything and everything, including planning your honeymoon and/or making dinner reservations. Nothing is beyond her.  Say Bonjour Paris referred you and put her to the test of making your stay in France perfect.