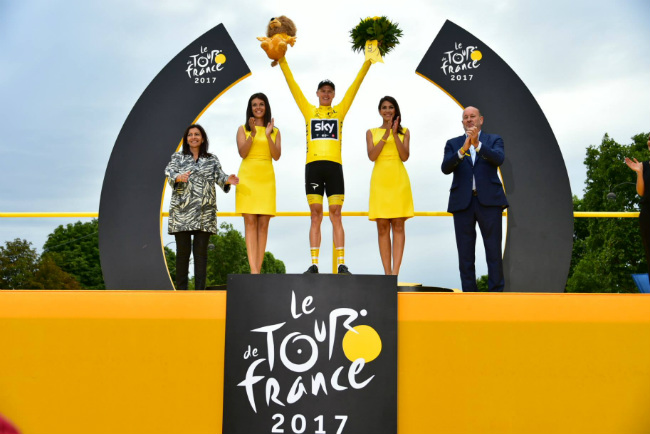 As the Tour de France cyclists swept through Paris on Sunday, Chris Froome bolted through, taking the title of victor at the 2017 Tour de France.

The Tour de France has been delighting the cycling enthusiasts – and us crowds who get swept up in the once-a-year fervor – since 1903, when Italian-born, French rider Maurice Garin won the first-ever Tour. The epic event originated as a way to help sales and circulation figures for French newspaper, L’Auto.

The race attracts riders from all over the world. This year Chris Froome comes one step closer to joining the prestigious group of riders who have won the Tour five times: Anquetil, Merckx, Hinault and Indurain.

(American cyclist Lance Armstrong, after a very public fall from grace, was famously stripped of his seven consecutive Tour de France wins, following evidence that he had been doping through each race. Armstrong continuously denied these claims until the Oprah interview.)

And now, in 2017, the Tour is as popular as ever. Concluding on Sunday, July 23, in Paris, Froome took the (metaphorical) crown as race champion. The Telegraph reports that the cyclist “nearly fluffed his speech, ­dropping his notes on the podium beneath the Arc de Triomphe and requiring runner-up Rigoberto Uran to rescue them before they blew away…”

His flustered state was warranted; this is the race of all races in the cycling community. Froome, age 32, is a Brit born in Kenya, who grew up in Kenya and South Africa. He has raced as a British citizen since 2008. Prior to 2008, he represented Kenya.

The race, which lasts for 3 weeks, and covers over 2,000 miles of terrain, ended in Paris in ceremonial form, with all the pomp and circumstance fans have come to expect from it. (Cycling Weekly provides an in-depth, “stage-by-stage” breakdown of the race here.) It ended with racers riding through the Grand Palais, which was supposedly a grand display drum up publicity for the Paris bid for the 2024 Olympics as a way to, presumably, put on full, worldwide media display, all the glory, beauty, and crowning place of athletic achievement the city can offer to elite athletes in 2024 (should the city’s bid be successful).

This is Froome’s fourth win of the Tour de France, earning him yet another coveted yellow jersey, or maillot jaune, as it is called in French. Froome and his team circled the Arc de Triomphe, gracefully balancing a glass of champagne in one hand at one point on the victory stretch whilst riding (video of the impressive imbibing feat can be viewed on France Info here). The victorious Kenyan-British racer has stated he would like to keep competing in the Tour into his late 30s, so there is much time for him to best the current records of 5 wins.

Froome won the 2017 Tour against Columbian cyclist Rigoberto Urán by just 54 seconds, which just goes to show what a difference a (almost) minute can make. Life can change in a New York – and Paris – minute.

Previous Article Best Japanese Food in Paris: Komatsubaki
Next Article Les Grands Voisins: A Community Project (and Camping) in the Heart of Paris