There are thousands of cafes and bistros in Paris and every traveler over time finds their favorite. However, one stands out in the city made for the gastro-adventurer. Actually, it is more than one, and they are all from the vision of one man, Yves Camdeborde.

After many years in Michelin starred restaurants, Yves Camdeborde broke away and kicked off a new brand of cafes that would bring the high level of food to a wider audience. In 1992, he opened La Régalade in the 14th arrondissement where Camdeborde began what we know today as the bistronomie movement. In 2005 he would purchase a hotel and restaurant in the heart of the Odéon district and the rest, as they say, is history.

From the beginning, the lines ran down the street, so Camdeborde had an idea to open a small wine bar next door. It was first opened as just a small place to grab a glass of wine and a bite before sitting down (thus the name L’Avant Comptoir). Reservations were not taken and even Anthony Bourdain called it the hardest table to get in Paris. Therefore, the wine bar was the perfect answer. A little over 20 feet long, the counter and kitchen filled the area and offered four food items, crepes and take-away sandwiches and of course the amazing collection of charcuterie. It eventually expanded into the space we know today; the crepes and sandwiches would disappear and the menu would expand over the long ceiling. Now there are two L’Avant Comptoir: mer and terre.

One just needs to look up at the heavenly assortment of small plates to sustain your hunger. While L’Avant Comptoir de la Terre is of the earth, it is heavy on the pork products and the beloved pig can be seen at every turn. There’s also duck, beef, fish and, when later in the night you need a little deep fried snack, they have you covered. I can never get enough of the Brochette Foie Gras Piquillos; the seared foie gras paired with the roasted peppers and balsamic reduction will change your life. Every time I am there and people look confused, I offer my assistance in ordering and always point them in that direction. There has never been a person that has not fallen in love with it.

However, there is even more. While the Louvre [1] has over 35,000 pieces of art on display the task of seeing it all is impossible, one may have the same feeling at l’Avant Comptoir. With over 120 tiles on the ceiling, many of which are rich and decadent, it could take just as long to try every one of them. Add in the specials that change each day that always feature an item that includes a “show”. The recent Planche Brûlée available with beef or tuna arrives on a small baking sheet raw, topped with fresh sprigs of thyme. With a warning to stand back, a blowtorch appears and this is when the magic happens. While the torch cooks the meat, the thyme is torched and the wonderful scent fills the air as it also imparts its flavor into the steak, which is perfectly cooked.

It’s topped with a salad of fresh, seasonal vegetables, marinated red onions, salt from the Brittany coast and finished with olive oil. While your senses are alive from the show, just wait until your taste buds get a load of it. I highly encourage you to take the challenge. Every item they make is amazing, many with just a few simple ingredients but that is the beauty of French cooking.

Chef Camdeborde works directly with many small producers and has for over 30 years. In fact when you are in L’Avant Comptoir look at the top of each wall; you’ll see the name of each of the farmers and producers that cultivate these amazing ingredients. Like the butter, oh the butter. The butter has a following of its own and may be the most Instagrammed butter in the world. First, there is the sight of it, a large mound of yellowy buttery goodness on a bed of parchment paper that is passed around the bar from one end to the other with a knife stuck into it staking its claim like a flag on Mount Everest. With just one taste, you will realize you have never truly tasted butter before. True butter lovers will know this name, Bordier. Jean Yves Bordier makes the butter for Camdeborde in St Malo, Brittany with the perfect amount of fleur de sel that’s like a pop rock surprise in every bite. You will find the butter– kneaded and pounded and shaped into a lovely mound in the 19th century technique– crowning the counter every day.

The charcuterie takes center stage and runs deep in the Camdeborde blood. Yves’ brother Philippe Camdeborde, artisan, and Eric Ospital, a celebrity in the charcuterie world, supply the many meats and sausages including Jambon Ibaiama, Jambon de Pays, chorizo, coppa, boudin noir béarnaise, and Saucisson sec. A sampling of each paired with the butter and the bread is what you will dream of long after you have left.

You need some bread for all that wonderful butter; a cornbread, cumin flavored bread is cut in generous pieces lining the bar just waiting for that butter. Thierry Breton makes the bread daily for the restaurants. Breton has three of his own restaurants but in the basement, he makes bread that is enjoyed in many other Paris restaurants including Camdeborde’s. Like many of the producers that Yves works with they all go back many years. Working together at the Crillon [2] they all changed paths and we are truly lucky for that.

Now let us get to the really good stuff; it is a wine bar after all. In tall coolers behind the bar are over 150 bio and natural wines available by the glass or bottle all hand selected by Camdeborde himself. All from small producers, never commercial wine it is the wine list for a king. However, do not come in and ask for a list; the amazing staff is the list. With a few questions, they will match you with the perfect wine. Red, white, rosé and bubbles, whatever your heart desires.

As wonderful as the food and the wine is there is one thing that makes L’Avant Comptoir de la Terre my favorite place in all of Paris. It is the lovely staff. Sylvain Orel has worked behind the bar for over seven years and is what truly makes it so special. Sylvain is a master when it comes to wine and service. On a busy night, it is like watching a ballet seamlessly moving from one end to the other but always with a coy smile and a laugh. Sylvain knows his wine inside and out and I have rarely seen a customer not happy with each wine he has selected for them. Orel arrived in Paris at 4 years old when his family moved from the south of France. Studying at Ferrandi, he would end up working in restaurants every two weeks of his study in the kitchen and in service, until he left the kitchen behind and focused on the front of the house. Working his way through some of the best restaurants in Paris including Chez Françoise, Lasserre, Le Physalis and Le Cercle Nationale des Armées for Chef Guy Martin and then he landed at L’Avant Comptoir in 2012. In addition to Sylvain, Geoffrey Loustau and formerly Jordan Veran rounded out the staff that have become dear friends. Hard at work in the tiny kitchen that you would be amazed to know produces the over 150 options a day is Hamadi Sylla and Oscar Arvide. Two of the best chefs in Paris under the tutelage of Camdeborde.

Where every night Sylvain tries to teach everyone that comes in the subtle art of being French and enjoying the finer things in life. We only have one life so take every moment and savor it. No need to rush to the next monument or museum. Enjoy every bite and every sip. We both promise that you will get more from Paris and your life if you do.

Camdeborde has said, “The restaurant is not only the plate: 50% is the service. The atmosphere does the rest”. That sums it all up completely. While the food and the wine are amazing it is the staff that truly make it the best place in all of Paris. Stop by on your next trip to Paris; you most likely will see me there hoisting a glass of Champagne in the happiest place on earth. 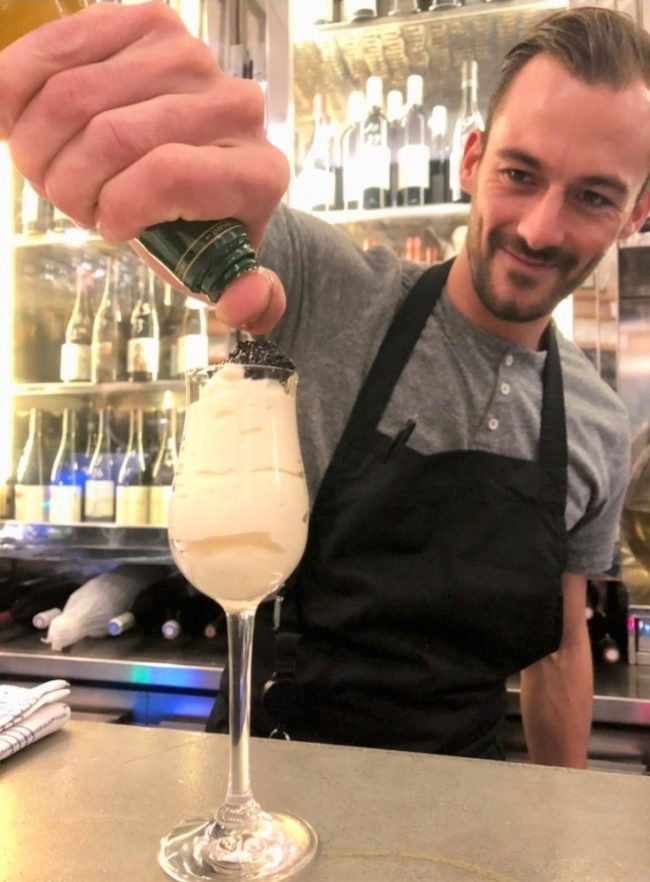