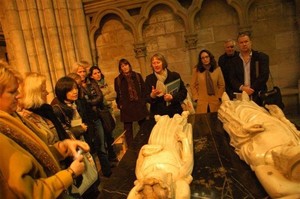 People often ask me what they should do while they’re in Paris, and one of the things I frequently recommend is that they go on a Paris Walks Tour.

Peter and Oriel Caine, creators and owners of Paris Walks, came up with the idea of starting their own tour company when they were working as freelance tour guides.  Both originally from Britain, they had met as university students in Paris—he was studying history and art history, she was studying history and French literature. After earning their degrees they studied for, and passed, the rigorous exam required of all licensed tour guides in Paris, and began giving tours for other companies.

Somewhere along the way, they decided they should go into business for themselves. Thus was born Paris Walks, and 19 years later, with approximately 100 different tours in its repertoire, Paris Walks is perhaps the most prolific source of
English-speaking walking tours in town. It is also one of the best bargains, and best ways for a tourist (or a permanent resident) to spend time in Paris.

As with most great ideas, and most successful entrepreneurs, success was not instant. When the Caines first started their tours in 1994, many of their clients were friends and members of their families, and the groups they led initially were often quite small.

But they knew they had a good idea, and that they had a lot to offer. They hung in there: and repeat customers and word of mouth helped their business grow.  Gradually they built an impressive selection of tours, covering a variety of topics, from the Medieval Latin Quarter to Art Nouveau Architecture, from Secrets of the Left Bank to Highlights of the Louvre. 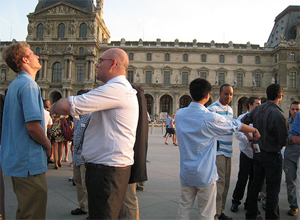 As their business grew, so did the need for more tour guides: and one of the best things about Paris Walks Tours is that all of the guides are extremely knowledgeable (all are university graduates, some of them with advanced degrees). The tours are intellectually stimulating, well-researched, and serious, which is not to say boring. I’ve been on a number of their tours, led by different individuals: all of the guides understand the importance of good storytelling, and all of them know how to hold their audience’s interest, while also providing them with impressive and reliable factual information. The guides are selected on the basis of their extensive knowledge of, and passion for, a particular area of expertise. In addition, says Oriel Caine, “We are all long-term residents in Paris, so we can provide a bridge between French culture and the visitor who wants to gain more than just a clichéd, or superficial view.”

While many of the tours focus on history, art, and architecture, a rich variety of tours on other topics is also available. For example, there are tours of l’Opéra, and Pere Lachaise cemetery led by Malcolm Livesey, a classically trained singer with a fine baritone (“which you may be lucky enough to hear on one of the tours, when the occasion arises,” according to the Paris Walks website). There are also fashion tours, a chocolate tour, tours of the catacombs and the sewers, and a “Taste of Paris” tour led by Mary Ellen Manny, a Minnesota-born-and-bred Parisian who has earned the extraordinary honor of judging the St. Maure goat cheeses from the Loire Valley— to name just a few. A longtime favorite, the Hemingway’s Paris tour, has become even more popular since Woody Allen’s film, Midnight in Paris, brought members of the famous Lost Generation to life for movie-goers. And new tours are always being added: last summer, in connection with the 70th anniversary of the infamous roundup of Parisian Jews during World War II, a new tour, “The Resistance, the Occupation, and the Vel d’Hiver,” was added. There are tours specially aimed at families with children; and in addition to a full schedule of regular tours open to the public, arrangements for private tours can be made. 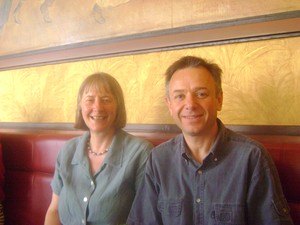 I met with Peter and Oriel Caine and a few of their guides in one of their favorite cafés last summer to talk with them about their work. “What’s your favorite tour?”  I asked Peter, bringing forth his instant and unhesitating response: “The one you’re researching at the moment,” he said, with a disarming grin. I also asked him what he likes best about his work as a guide. “The contact with the public, and having the chance to practice your new knowledge. Working with history all the time, keeping it on the boil. Also, the pleasure people get from the tours: everybody’s always happy,” he said. “It’s very gratifying when they suddenly understand something that you have explained, or the origin of an expression or word,” Oriel adds. And when asked what he loves most about his work, guide Brad Newfield responded, “The people who go on our tours are a special breed. I always learn something from them.”

The tours operate 365 days a year—yes, 365!—and go on, rain or shine. The business model is wonderfully simple. For most of the tours there is no need to make reservations: you just show up at the designated meeting place on time (most often outside a Metro station). Most tours are scheduled for two hours (sometimes, between the enthusiasm of the guides for their subjects, and equal enthusiasm from their listeners, they go over by a few minutes). And they really are walking tours, so if you plan to join them, wear comfortable shoes and be ready to walk.

At 12 Euros for most tours, (10 Euros for students under 21, and 8 Euros for kids under age 15), Paris Walks tours are one of the best bargains in town. Along with thousands of satisfied customers, Paris Walks has gathered impressive endorsements from the likes of Rick Steves, Fodor’s, Lonely Planet, the Rough Guide, and the Paris Tourist Office. They’ve also been favorably reviewed in many major publications, including the New York Times, The Sunday Times, the Economist, and the San Francisco Examiner.

For those who can’t get to Paris right now, or who want to prepare for their next visit, the Caines have also written three books that armchair travelers may enjoy: Paris and the Da Vinci Code, Paris Then and Now, and Paris History and Mystery. For more information about Paris Walks tours, click here [1].

Janet Hulstrand [2] is a writer, editor and teacher based in Silver Spring, Maryland. She teaches literature classes at Politics & Prose bookstore in Washington, D.C. and Writing from the Heart workshops in France and in the U.S. Each summer she teaches “Paris: A Literary Adventure,” in Paris for the Queens College, CUNY Education Abroad Program. Click on her name to more about her, and read her essays published by BonjourParis.