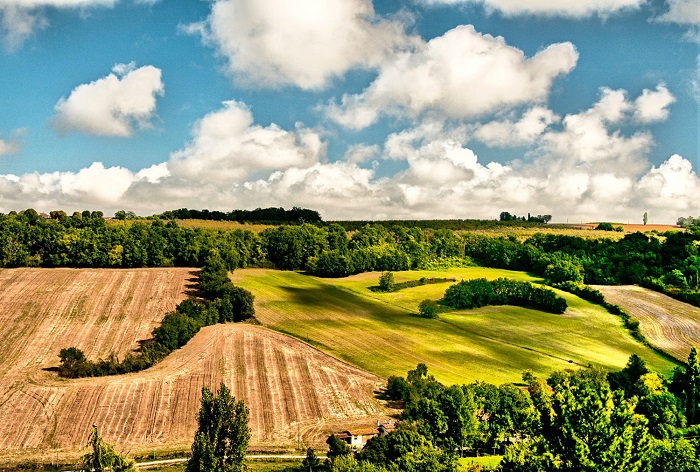 My husband and I first traveled to Gascony in May 2006 with a couple of dear friends, looking for a house to purchase together. All of us loved rural France. Our criteria included proximity to airport, train, village, doctors and hospital.  We rented a two bedroom, stone cottage in a small hameau (hamlet) located in the Gers, (department 32), often called the Tuscany of southwest France, for its good weather and bucolic landscapes.

For 5 weeks we spent mornings site seeing and visiting local farmers’ markets, afternoons enjoying alfresco meals outside, and long twilight evenings strolling country roads under a panoply of stars. We put 3,500 kilometers on our rental car looking at 25 houses in various stages of disrepair.  A week before the trip ended we saw our last house –a 300-year-old ruin built of stone and colombage (half-timbering) sitting on a knoll in the middle of a 500 hectare farm. 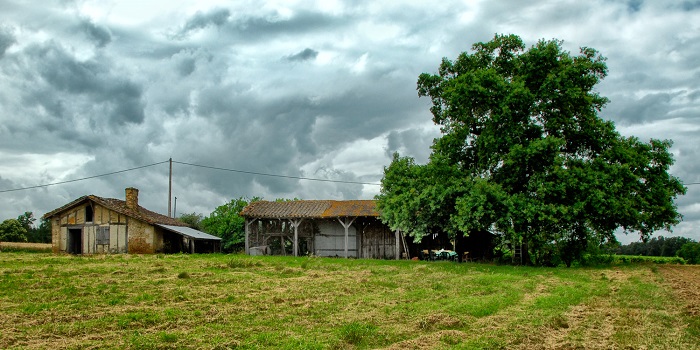 Its front door faced east, the rising sun cresting the village of Campagne d’Armagnac, and to the south we could gilmpse the peaks of the Pyrénées mountains. Just across the road to the west were vineyards and to the north, through the branches of an old oak tree, the 11th century Basque church, Cutxan, rose majestically into the azure blue sky.  The ruin had no electricity, no water, and no plumbing. The attic was full of old bottles and rusted tools and the barn was stuffed with ancient farm equipment.  An overgrown pond was a watering hole for chevreuil (deer), sanglier (wild boar), écrevisse (crayfish) and hérons, (herons). For some inexplicable reason my husband and I were smitten. Our friends were not interested at all.

We returned to our respective lives, unable to stop daydreaming about the ruin.  Often we reminded each other of meeting the elderly couple, Jeanette and Roger, who owned the ruin, as welcoming to foreigners as any two people could be.  Each spoke a Gascon patois almost indecipherable, especially Roger, but each possessed a joie de vivre that was clearly communicable.  In October we decided to go back to the Gers to see if the magic was still there.  We stepped off the plane in Bordeaux, picked up a rental car and drove south.  Once actually at the ruin, we both felt like we had come home.  We hadn’t the faintest idea that 8 years after purchasing the property we would be mired in the French court system, tied up in legal bureaucratic knots and intrigues and separated by more than an ocean. 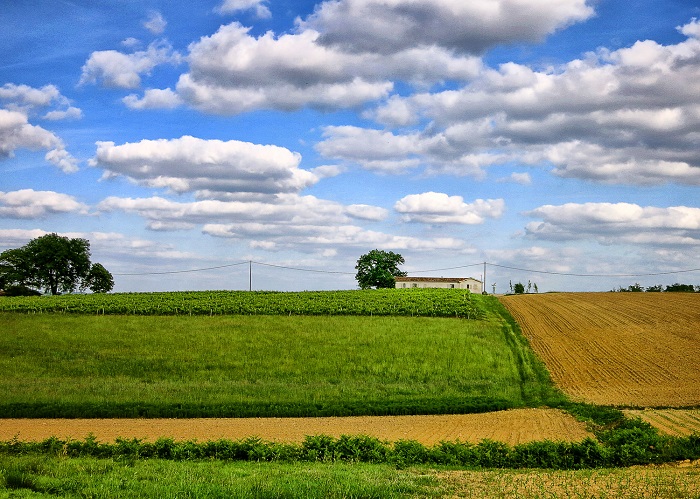 We purchased our half hectare (1 acre) property for 70,000 euros, approximately 100,000 dollars. The whole process took 6 months. The following year we returned and interviewed local builders and chose one highly recommended by the only other American couple we knew there.  As a former architectural designer, I drew a set of plans and researched local building codes. I kept the square meters of the house just under the necessity of a French architect.  I submitted six different sets of plans, each summarily rejected by the head of the local building department, Monsieur Lafitte.  Finally, it was suggested that I return to see Monsieur Lafitte wearing my sexiest outfit. I coerced a much sexier friend to accompany me as backup. I brought a roll of drafting paper and pencil and asked him to draw what would be acceptable to him, which he was more than happy to do. After half an hour, the plans were approved.

Renovation began the next year. We arrived at the end of April, hopeful the project would be completed by mid-summer.  We planned to sell our house in the States and move permanently to France. After our first walk-through of the house, we discovered our builder was more charming than competent: everything from the foundation to the roof needed to be redone – our renovation needed to be renovated. We fired the builder and subsequently hired two building experts and two attorneys. The second building expert, hired by us but appointed by the court, first found in our favor then, remarkably, retracted his ruling three months later. We waited to sell our house in the States until we had a home to live in. Our dream house sat untouched for the next 4 years. 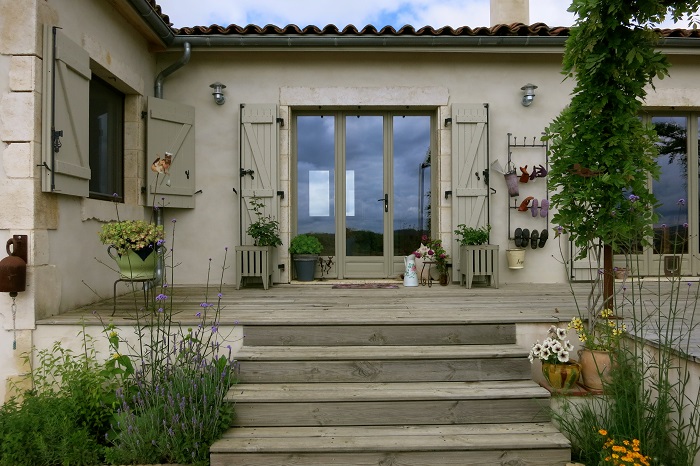 The following April, in 2011, we filed an appeal and returned to France only to have the judge tell us we had no right to question a court-appointed expert. Our new attorney changed his strategy and we filed for another court hearing. Each year, for two more years, we would return hopeful a final court date would be set, but each year the builder was granted a postponement. In 2013 we were finally allowed to continue work on our house, but the lawsuit lingered, our retirement fund was depleted and my husband decided he would never return to France.

I made the big leap across the pond, alone.  I applied for a visa and hired an international moving company. By returning every year and immersing ourselves into the life of of our village, we’d been able to harvest deep and lasting friendships and a collective appreciation for the quality of life in southwest France which provided the support I now needed to begin my life anew. The lawsuit was finally heard September 2014.  My ex-husband and I were awarded rien, nothing. I was disappointed, to say the least, but not disheartened for this is where my heart truly resides. Who hasn’t felt the urge to drop everything and follow their dream regardless of the cost? 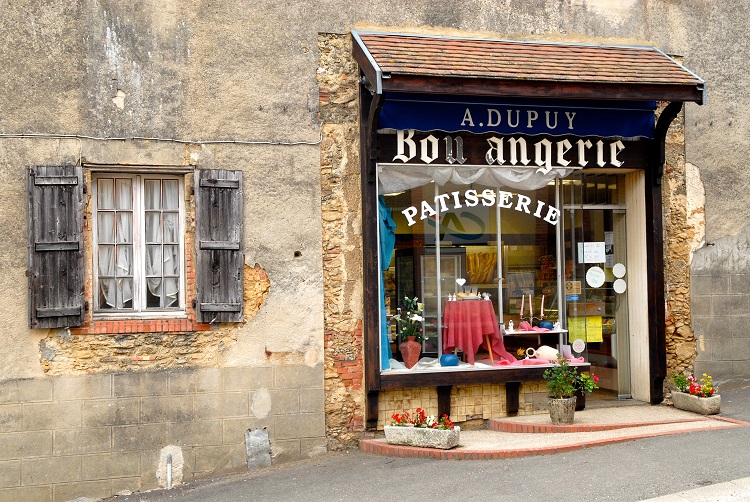 The Gascons genuinely embrace the joy of living. The simple pleasures of life are the most important: family, friends, good cuisine and lively conversation. They have no concept of the word “urgent” unless it refers to food or sex. Well-being is not a luxury but an ordinary, daily prerogative. Economically, the cost of medical care, car and home insurance, utilities, taxes and food are a fraction of what they cost in the States. I can purchase a freshly baked, mouth-watering almond croissant or a crusty baguette at my local bakery for under a euro and a glass of good local wine is cheaper than a glass of sparking water. My property taxes are 153 euros a year compared to the 5,600 dollars in the States, a doctor’s visit 23 euros. Even airline tickets are less expensive when purchased overseas.  This has allowed me to travel around the world visiting my stateside children and friends when they are not traveling to visit me.

When I arrived 9 years ago, I assumed the Earth was round and the sun set in the west, but I’ve discovered that lawyers have feelings, tomorrow was yesterday and pigs can fly. I have had many incredible adventures and learned much about myself through living in another culture. Instead of my world becoming smaller at this stage of my life, it has become larger and I will feel forever grateful. 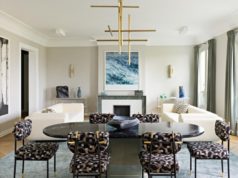 For Sale: Exceptional Flat with Terrace near Place de l’Etoile 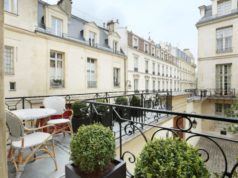 For Sale: Stunning Luxury Apartment on the Ile Saint Louis

An Artists’ View – Shape, Color and Texture in the Gers