Inside the Hotel Molitor Paris as it Celebrates its 90th year 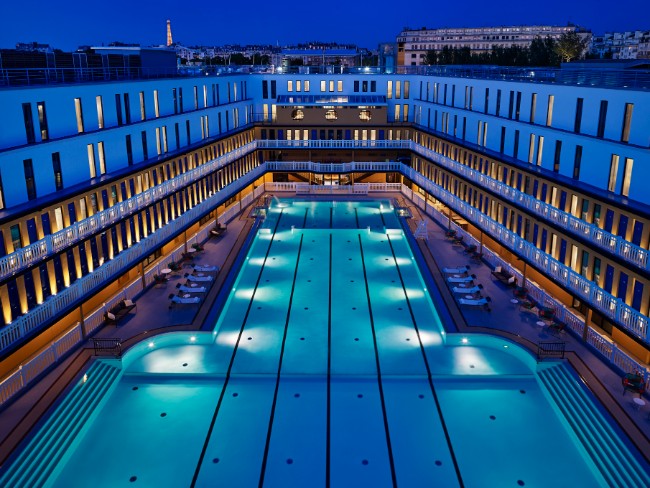 When the “piscine Molitor Grands Etablissements Balnéaires d’Auteuil” first opened its doors in Paris in 1929, it was the final touch to an already impressive sports offering in the city’s 16th arrondissement. 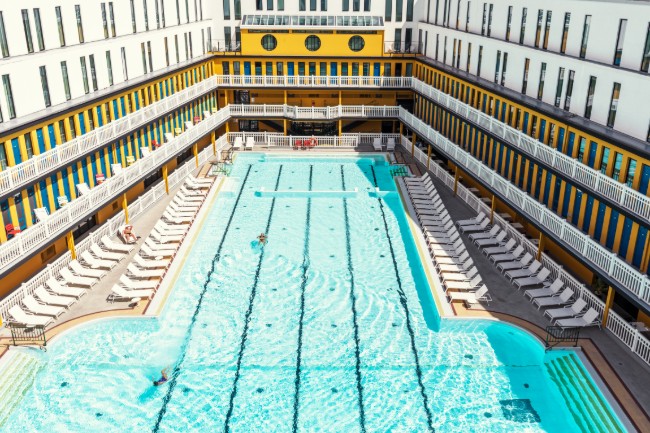 Along with the Parc des Princes, Jean Bouin Stadium and Roland Garros, piscine Molitor helped establish the area as a serious sporting destination, and to prove the point U.S. Olympic gold medalist Johnny Weissmuller was invited to open the pool, with the future Tarzan actor even working there as a swimming instructor during the early days. But it was not just a place to swim but also to be seen; more than 3,000 members of Parisian high society would cram in on a summer’s day, looking for somewhere more exclusive to splash around than the municipal pool. 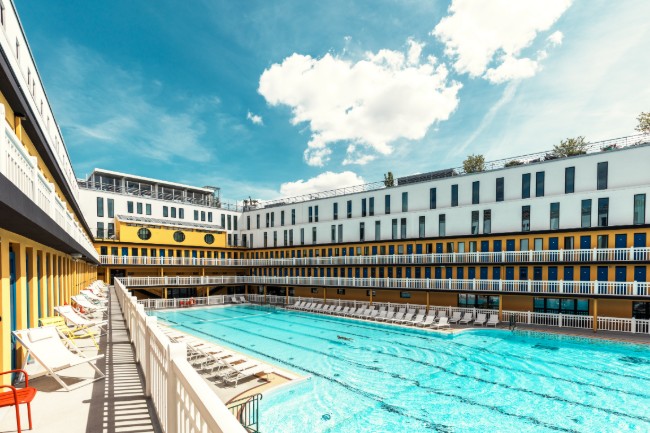 From 1934 it hosted the annual “Fête de l’Eau” and its bathing beauty contest, and its glamorous setting provided Louis Réard with the perfect location to unveil his daring bikini in 1946, just 30 inches of fabric made into three triangles to cover all the essential areas. It was so tiny that Réard said if it couldn’t be pulled through a wedding ring, it wasn’t a bikini. 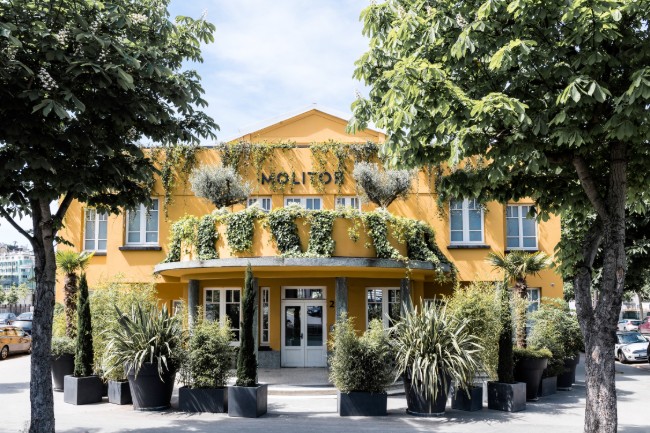 In the 1950s, the swimming pool also started to run as an ice rink, an idea which must have sounded as fantastic and foolproof then as it does now – who doesn’t love skating outdoors, especially when surrounding by an Art Deco masterpiece. But it was unfortunately one of the factors which led to Molitor’s downfall; in 1978 it was decided that an ice rink each winter was just no longer financially viable, and by 1989 piscine Molitor had closed completely. During the next ten years it became a mecca for street artists, who would use the abandoned building as a blank canvas for their work. The indoor Winter pool was a favorite spot as it offered more coverage from prying eyes. 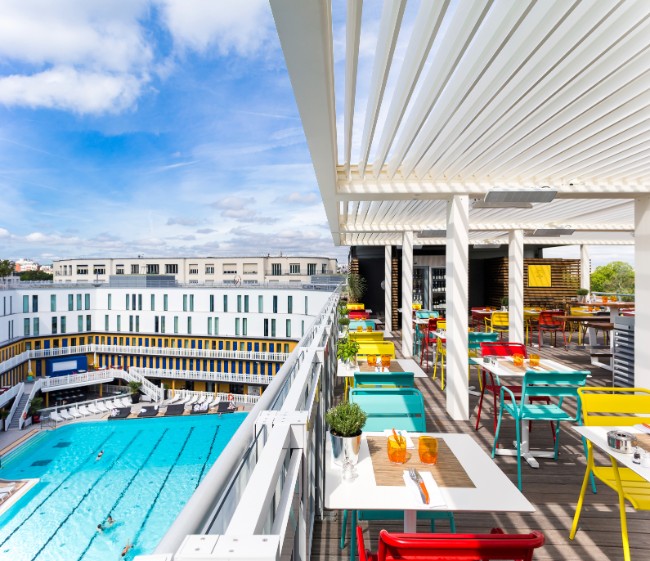 But despite years of neglect the pool was not entirely forgotten, and it re-opened its doors on May 19th, 2014 as an MGallery by Sofitel hotel. Part of the Accor conglomerate, Molitor has thankfully still retained its own identity, in part due to the property being registered as a historic building. New parts have been built, while others have been rebuilt – the changing cabins in the Winter pool being a good example – but throughout the design has been faithful, even gaining the approval of Lucien Pollet’s daughter, the original architect of piscine Molitor.

Molitor’s home in the 16eme arrondissement is still the area it was 90 years ago: bourgeois, residential, and truth be told, rather unexciting. But, the sports facilities that drew crowds back in the 30s remain today, and if guests haven’t checked in solely for a chance to take a dip in the famous outdoor pool – which is only open to those booked into a room or the spa – then it’s often to attend the nearby sporting events. Stade Roland Garros is just next door, making Molitor prime accommodation for French Open fans, and you can even see the tennis in action from the rooftop terrace. Paris Saint-Germain’s stomping ground Parc des Princes is just a five-minute walk away and ParisLongchamp race course less than 20 minutes by car. 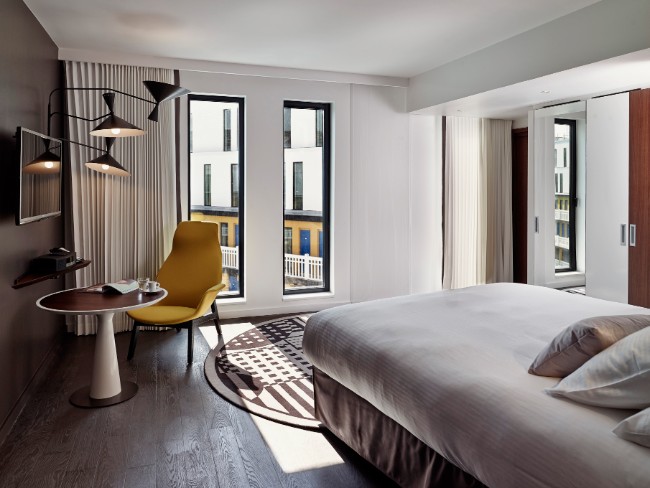 The hotel itself is almost a mini resort, which entices you to stay and work on your wellbeing rather than trek around on the Paris metro to sightsee. Of course, there are the Winter and Summer pools, the latter of which is heated during the colder months but is still rather fresh – you’ll find most people doing laps indoors rather than braving the cold – as well as a large gym area, which is popular with locals who take out membership here. 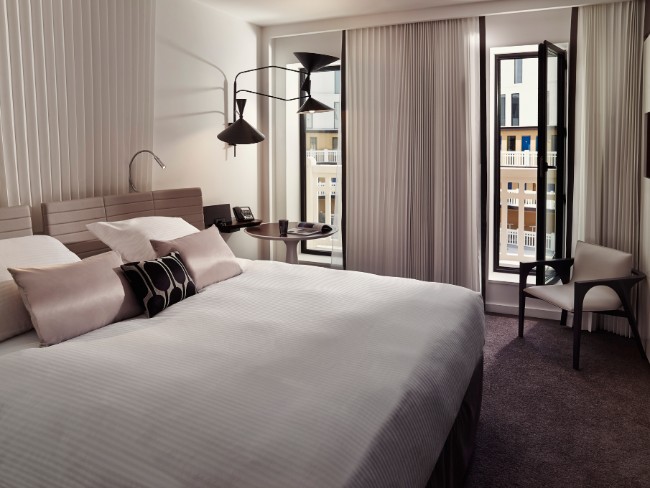 Molitor’s new life as a hotel has seen an impressive spa added, which boast 13 treatments rooms and two private suites, a hammam, sauna, reading room and tea room and even a Shu Uemura hairdressing salon. And while the Clarin’s spa treatments are designed more for relaxation and beautifying, Molitor goes one step further, offering six sports-specific massages, including those for runners, golfers, and of course swimmers. 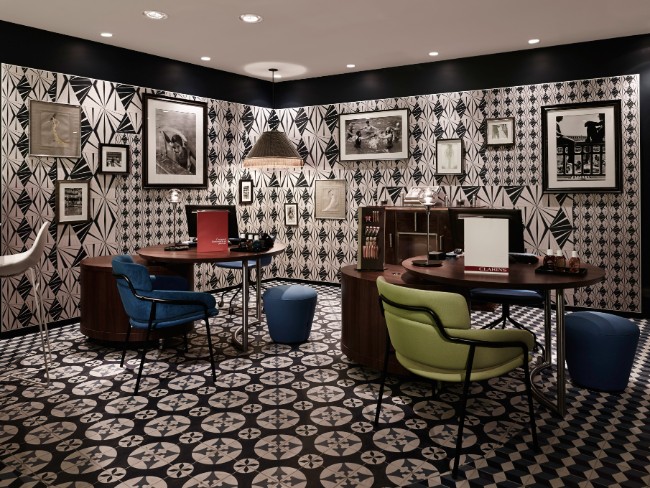 The other side to Molitor’s personality is art, which in a nod to its derelict past now fills the hotel. The artwork in the lobby might be a jarring when you first enter – a graffitied classic car is certainly not expected from an Art Deco icon – but in the Winter pool, it works. Here the former changing rooms have been rebuilt and individually decorated by a collection of street artists, many of whom painted in the hotel whilst it lay in a state of abandonment. With a different piece of artwork in each cabin, the space now functions as the hotel’s own art gallery. Some of the artists, such as Monsieur Chat, enjoy a certain level of fame, and you can book a guided tour of the cabins with Art Director Sylvia Randazzo, just as you would at say, Le Louvre. 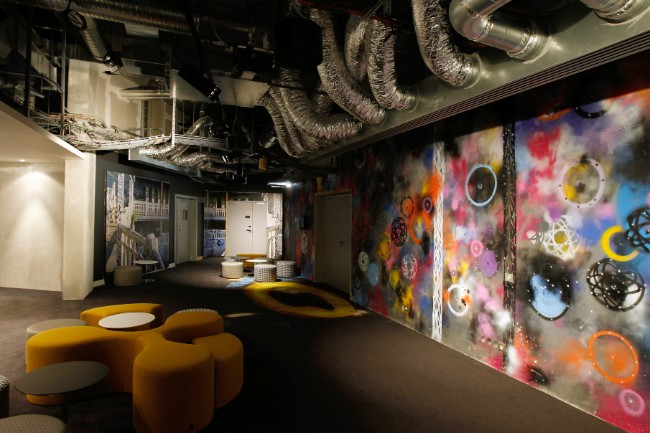 For the rest of the hotel, the keys were entrusted to lauded designer and architect Jean-Philippe Nuel, who updated the space for modern day with his signature contemporary style. In contrast to the bold yellow Art Deco exterior, the rooms are rather minimalist, all white walls and sleek light fittings, and those who expected something inspired by the glamour of the Molitor’s heyday may find themselves disappointed. There are some original features dotted around the hotel however, most notably the stained glass in the hotel corridors and the bar area, which were discovered during Molitor’s renovations. 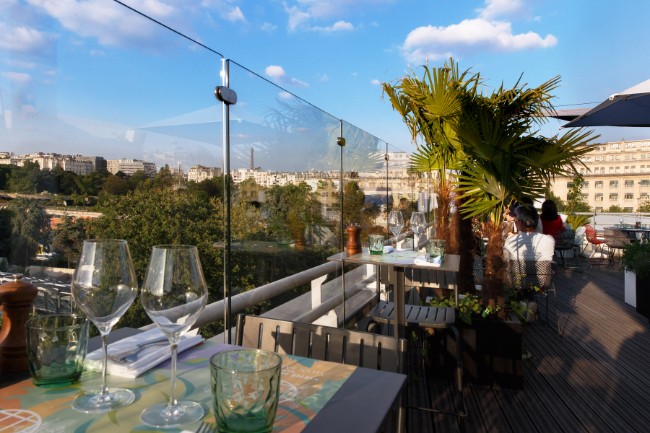 Although touches like this show the hotel respects, and is clearly proud of, its past, Molitor does plan on evolving. The hotel gained a new chef earlier this year, whose menu showcases Syrian influences alongside French classics. A range of women’s swimwear is also on its way, with a collection for men already on sale, and to show just how serious its fitness offering is, the hotel has recently launched high tech sounding cryotherapy in the spa. 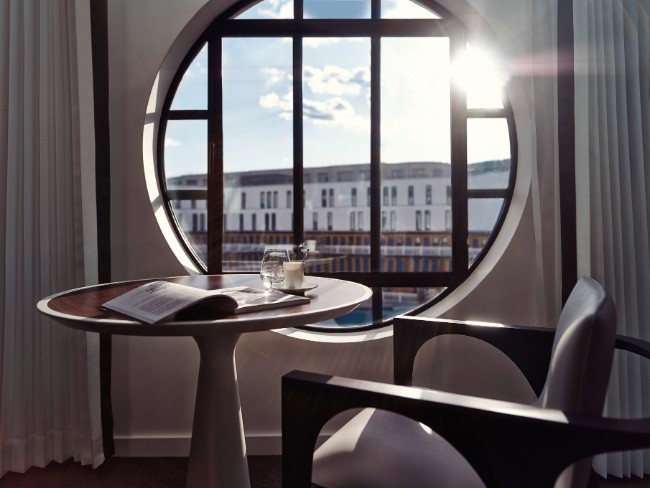 Surprisingly, there are no any events planned to celebrate the landmark birthday, although in a nod to the hotel’s regular DJ nights, Molitor has released a selection of original summer tracks on Spotify and the French platform Deezer, created by French artists who have been inspired by the hotel. The will also be a celebratory coffee table book out in October, which will focus on the Winter pool’s Art Cabins and Molitor’s creative history, which is sure to continue for some time yet.