“It’s not only the cooking – the arts de la table are very important in a restaurant of this standing”, reflects Christopher Hache in the sumptuous space that replaces Les Ambassadeurs the former ‘ocean liner’ of a restaurant at Le Crillon.

The former Les Ambassadeurs restaurant was a breeding ground of superchefs such as Dominique Bouchet, Christian Constant, Jean-François Piege and Christopher Hache– and it’s now a buzzing bar with discreet jazzy entertainment and awesome cocktails by Christophe Davoine. L’Ecrin – headed by Hache – is located further back in the former Salon des Citronniers open for dinner from Wednesday to Monday – so book well ahead.

After completing his last service, before the transformations began, at Les Ambassadeurs, on March 30th, 2013, Christopher Hache traveled extensively – taking up invitations to work with some of the world’s most exciting chefs such as Paul Liebrandt in New York, Danish maven Ronny Emborg at Altera, New York; The French Laundry with Thomas Keller and Meadowood by Christopher Kostow in California’s Napa Valley. Also popping by D.O.M. and Alex Atala in São Paulo; Astrid y Gastón of Gastón Acurio, Central, by Virgilio Martinez Véliz and Maido by Mitsuharu Tsumura in Lima; then Quintessence with Shuzo Kishida in Tokyo; Kikunoi of Yoshihiro Murata, Kyoto.

“I’m telling new stories and weaving the discoveries into my cooking to add bold surprises, new flavors and techniques to my repertoire,” he promises. “L’Ecrin translates as “jewel box”,” he adds. With its dramatic petal decorated central chandelier, trompe-l’œil origami style ceiling, smoked mirrors and appliques in molten Murano glass, L’Ecrin has space for just 26 guests overlooking the Jardin d’Hiver. 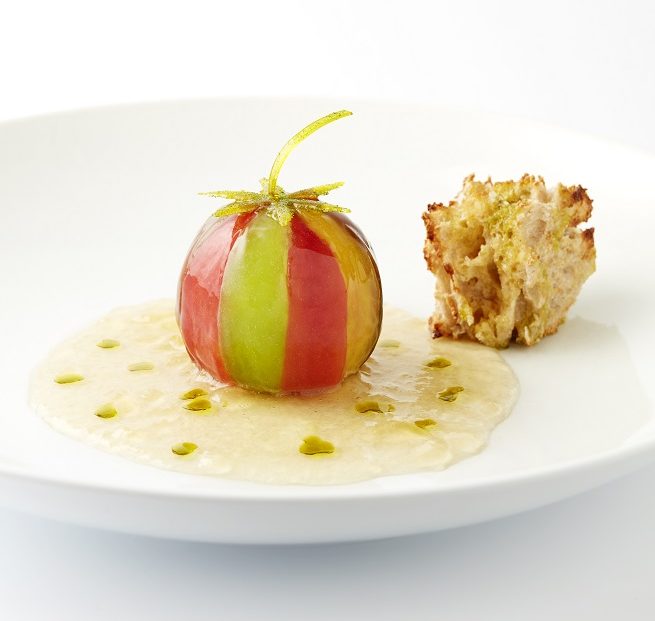 Divine desserts are by MOF Jérôme Chaucesse, a puff of soufflé Grand Marnier that rises in front of us – a vacherin of apricot confit, fresh almond sorbet, meringue.

Hache heads up his menu thusly: “You can never cross the ocean unless you have the courage to lose sight of the shore.” –Christopher Columbus