Le Monde Est A Toi (The World is Yours) is a comedy directed by Romain Gavras (son of the Greek director Costa-Gavras), his first film since 2010’s Our Day Will Come. It’s a perfect summertime movie, splashy in style and much of it set in a Spanish resort. It’s modeled on tongue-in-cheek caper films by the likes of Steven Soderbergh. But instead of working like clockwork as the scheme ticks forward, the film is rather a mess. At some points it seems that the only thing holding the film together is a talented cast, which includes two icons of the French cinema, Vincent Cassel and Isabel Adjani.

The star of the film is Karim Leklou, a baby-faced actor who played in The Prophet. Leklou can drip poor-lost-boy charm one moment, then become an amoral cool customer intent on making it the next. He plays François, a young denizen of a ghetto banlieue that resembles Lagos more than Paris, and son of a professional criminal (his mother leads a band of female shoplifters). He decides to go straight by purchasing the North African concession of an ice-cream delicacy called Mr. Freeze and settling in a pleasant home in Morocco. This requires a sum he doesn’t have, and that his mother can’t or won’t help him with (she’s saving up for a villa in Provence). He turns to a deliriously creepy gangster named Putin. They concoct a scheme to buy a load of drugs from a Brit pusher in Spain and make a huge profit when it’s distributed in France.

The initial adventures have to do with getting the narco-investment kitty together. The first part also serves to marshal all the characters that appear in the film. Since Le Monde Est A Toi is also a buddy film, we’re treated to scenes with the buddy, Vincent Cassel. He looks good with his moustache and goatee, more vital than actors half his age, but much of the time he doesn’t seem to know what exactly he’s doing in this film—or the director can’t figure out what to do with him. Sometimes he riffs pointlessly, other times he seems to be gearing up for his real role. Fortunately he gets better as the film progresses. The half-mad Putin, who among other eccentricities has a serious love-hate relationship with his attack dog, is the most charismatic character, excellently played by Sofiane Khammes. Even when he’s not doing something batty you can see the manias circuiting through his nut. He’s a comic caricature, but has the exciting instability of the de Niro character in Martin Scorcese’s Mean Streets. But the really dominant actor in the film is Isabel Adjani. We expect Adjani to be a self-indulgent diva showing off her radioactive blue eyes and sex-doll lips, chewing up the screen and spitting it out at us. Well, she does. But her depiction of a toxic mother is up there with Faye Dunaway’s Bette Davis in Mommie Dearest and Angela Lansbury in The Manchurian Candidate.

It doesn’t stop there, though. There’s also the love interest, Lamya (Oulaya Amimra) since this is also a rom-com, a couple of low-level low-lifes determined to make it to the top of the dungheap on sheer verbal violence, a gang of African killers led by a corrupt Sephardic lawyer and more. The problem is that as entertaining as this is, the film is all over the place. The content is matched by the director’s technique: Gavras relies on a plethora of styles, many derived from music videos (where he had his start) and commercials (ditto) as much as from film-makers like Quentin Tarantino and Spike Lee.

Gavras seems more in control when we get to the action in Spain. Even though there are more zany characters (in particular the British narco, played by Sam Spruell) and a load of double-crosses, unexpected setbacks, brawls and chases, the caper plot carries us along with its momentum. But barely. Gavras’ father was a much more propulsive director, because his thrillers were based on a political dialectic, variations of fascists vs. the good guys. His films always made a powerful point. The younger Gavras is closer to Tarantino with his sense of humor, interest in pop music, and exploitation of colorful minorities. Tarantino is more controlled in the way he structures his films, but the messiness of Gavras’ film eventually takes on a form and logic of its own (or maybe we just get used to it).

Gavras is a social director in his way, determined to show us the Other France. His film has a delicious irony in that his hero aims to achieve his middle-class dream in North Africa, not Europe. Ultimately though, the film relies on conventional tropes: The romantic relationship with Lamya, the hero’s tender, but very unlikely friendship with the pusher’s young daughter, and the Capra-esque desire to become the Mr. Freeze-meister of the Maghreb. Le Monde Est A Toi winds up being a Tarantino feel-good movie. A contradiction in terms if ever there was one, but when it’s summer and you’re in an air-conditioned cinema inside while there’s a heat-wave going on outside, a refreshing one. 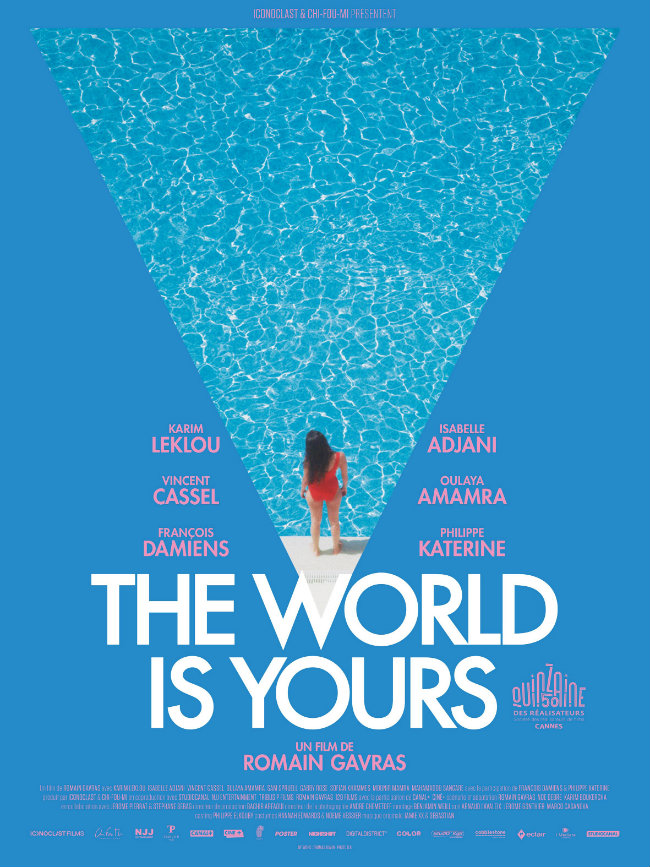