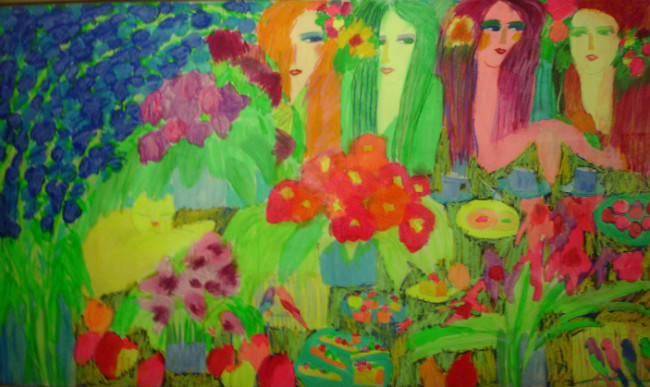 The name of Chinese artist Walasse Ting may not be familiar, but the Musée Cernuschi has mounted an exhibition of his work, “Walasse Ting – Le Voleur de Fleurs” (“The Flower Thief”), through February 26, that will leave you in awe of his artistic talent and dynamism. 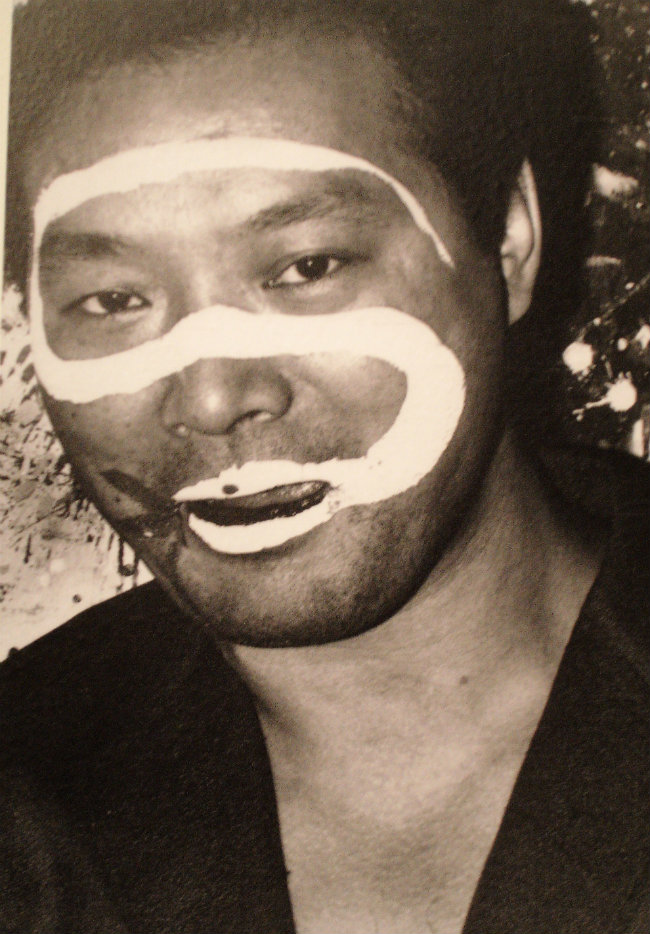 Ting was born Ding Xiongquan near Shanghai in 1928. He started painting as a young boy, and he moved to Paris in 1953. Around 1950 he changed his name to Walasse Ting, partially in tribute to Matisse (the name is slightly similar, he thought), whose work he admired. Following the Chinese tradition of adopting a poetic pseudonym, he also started signing his work “the great flower thief.” He had his first Paris exhibition in 1954. In 1961 and 1962, he was invited by Belgian artist Pierre Alechinsky, a founding member of the CoBrA (Copenhagen, Brussels, Amsterdam) avant-garde art movement, to create paintings “à quatre mains” – with four hands – several of which are included in the exhibition. 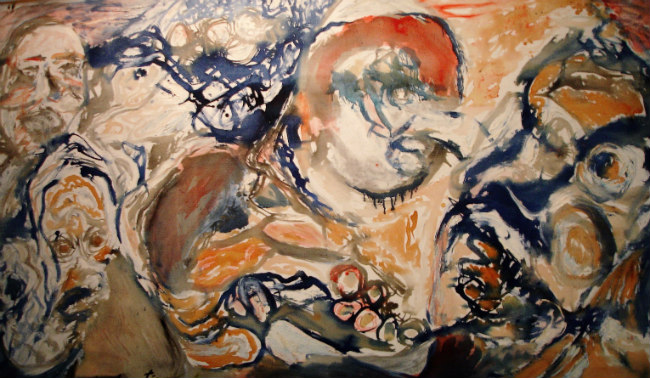 Ting moved to New York in 1957. There he met abstract expressionists and pop artists such as Sam Francis, Tom Wesselmann, Andy Warhol, and Claes Oldenburg. In the early 1960s, Ting had the idea of bringing together these artists to produce a book for which he wrote the poetry. The book was published in 1964 with the title 1¢ Life and included works by Francis; Alechinsky; Robert Indiana; Roy Lichtenstein; Robert Rauschenberg; Andy Warhol; and Joan Mitchell, a “second generation” abstract expressionist who, in my opinion, never gets enough attention. The book is considered a landmark publication, of which a selection of original art is included in the exhibition. 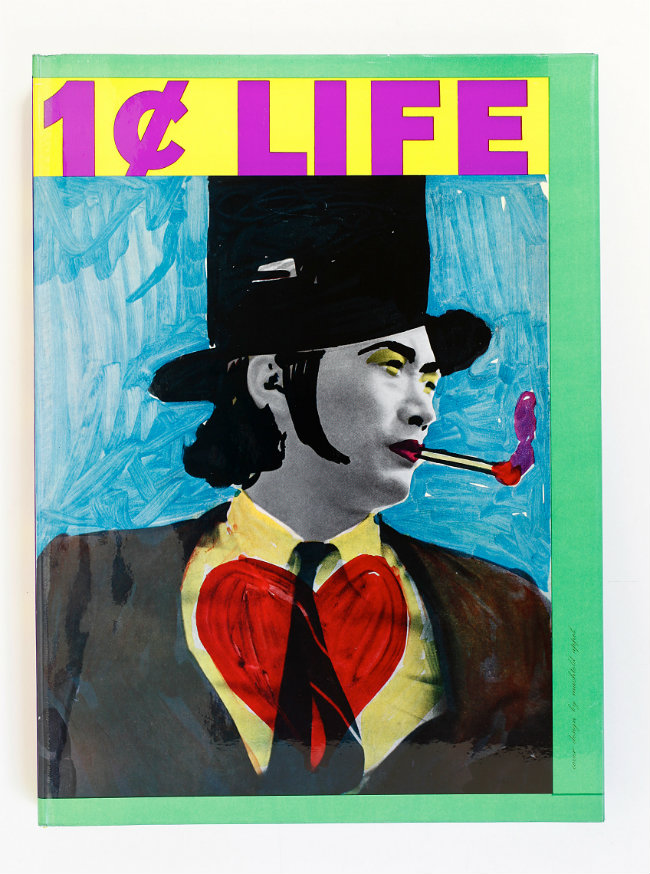 In New York, Ting produced a series of abstract works in vivid yellows, oranges, and blues with such titles as “I Take Off My Pants Facing Sunset” and “I Going to the Bath” (both in 1969); and a series of paintings depicting sensual, seductive women on canvases splattered and dripping with vivid greens, pinks, yellows, and blues . These include “Raindrops On My Eyes” (1974) and “Love Me Love Me Series 9” (1975). 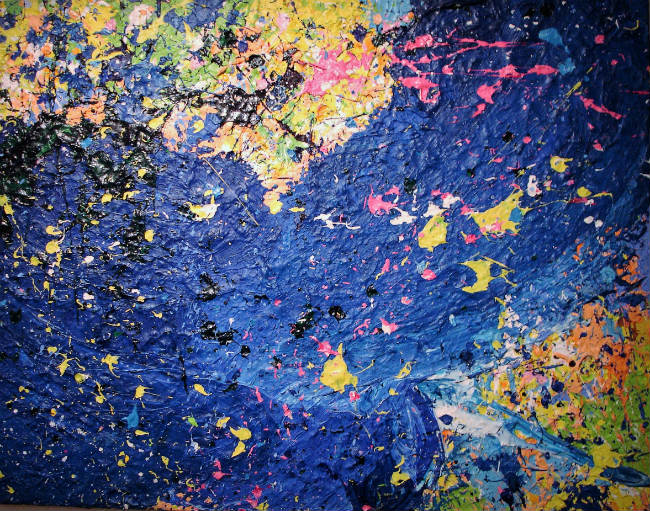 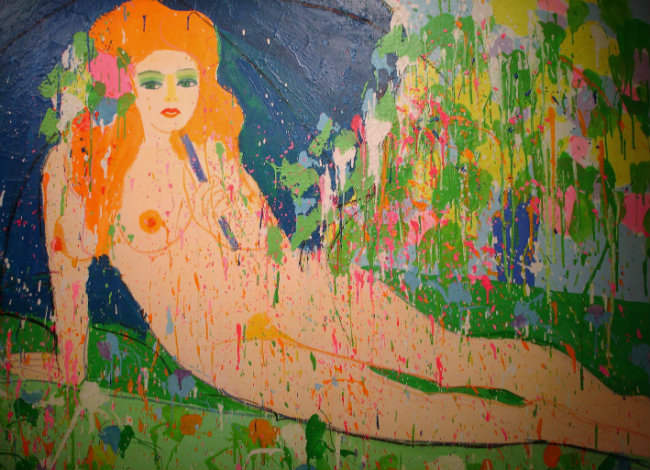 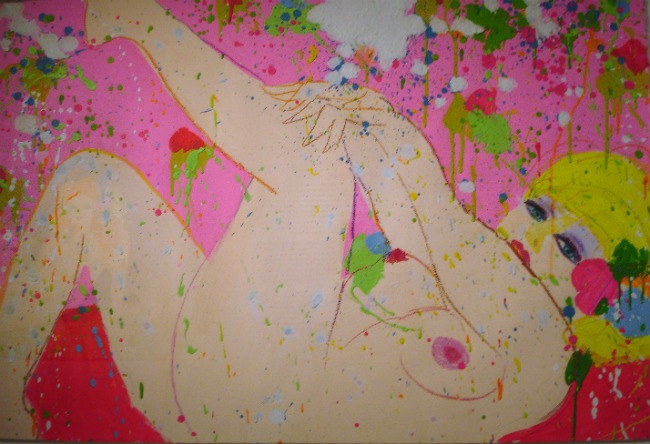 In contrast to the vividness of these paintings are Ting’s works of black ink on paper, some of which were also painted during the 1970s. Ting was intimately familiar with Chinese artistic codes, and his works in ink on a neutral background are clearly derived from traditional Chinese culture, as are the flowers, birds, horses, and insects he painted. The simplicity and delicacy of these works are in stark contrast to the vividness of the color paintings from this period. The ink paintings include “Papillons” (“Butterflies”) (1970) and “Sans Titre (Femme et Servante)” (“Untitled [Woman and Maid]”) (around 1975–1980). 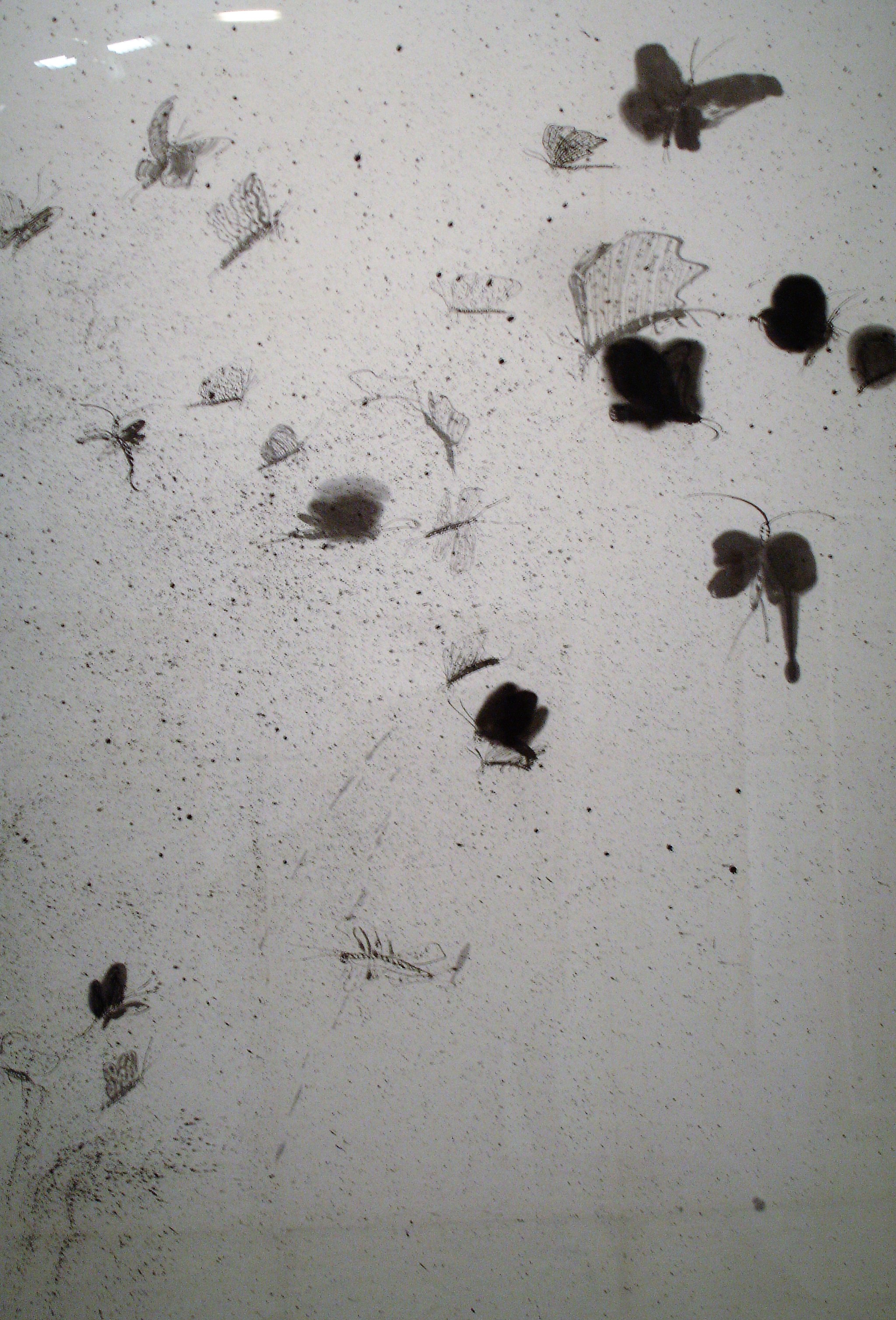 The paintings of Walasse Ting have been in the Cernuschi collection since the donation of two works in 1955. In 1970, Ting donated an additional forty paintings. Many of these works were too large to display in the limited exhibition space of the building, but a 2013 renovation remedied that. Thus, for the first time, “Cheval” is on display. This large work (it measures about 6 feet by 9 feet) of ink on paper, painted in 1970, combines representational painting, seen in the galloping horse and human figures, and the randomly splashed paint of “action painting” made famous by Jackson Pollack, whom Ting knew. The work embodies the explosive energy Ting infused into so much of his work. Ting does incredible things with eyes, and the eyes of the female in this painting are almost dagger-like. In other works, the eyes are sly or seductive. Amazing what he conveys with the simplest of lines. He was a great technician. 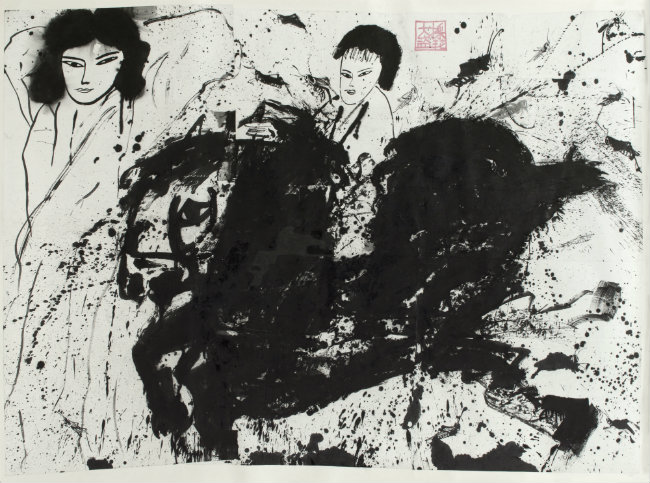 In the 1990s, Ting returned to the vivid paintings of females and flowers, as seen in, for example, “Spring Morning” (1990s), done in pastel; and “Outside Snow White” (1995), done in acrylic and pastel. The sure-handedness of the long, forceful strokes of pastel are evidence of the passion with which he created these works. The vibrancy of the colors in these large paintings is celebratory and bursting with joy. 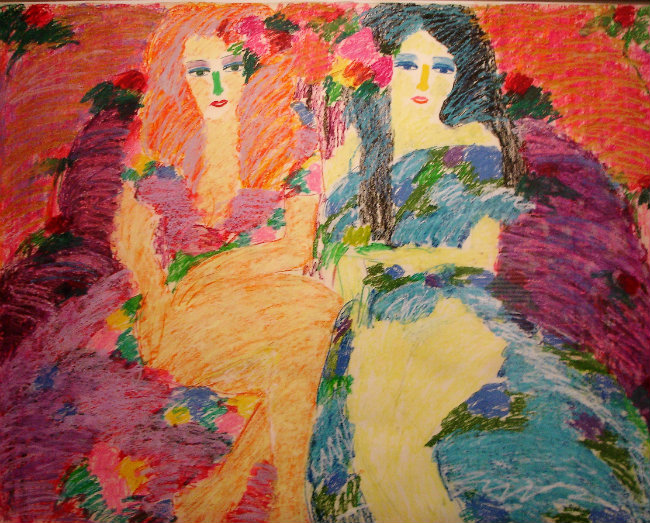 Ting had dozens of solo exhibitions in major art galleries and museums around the world. And although his works are found in the permanent collections of museums such as the Guggenheim and the Museum of Modern Art in New York, the Art Institute of Chicago, the Tate Modern in London, the Centre Pompidou in Paris, and the Hong Kong Museum of Art, his work is not widely known. The Musée Cernuschi mounted this exhibition to show Ting’s important role on the international artistic scene, and to show the diversity of his work. Thus, the exhibition provides an overview of Ting’s entire career.

In early 2002, I stumbled on an exhibition of Ting’s art in a gallery in Singapore. I never forgot its vividness and exuberance. The Cernuschi exhibition has only deepened my admiration of Ting’s work. It is well worth a visit.

Two short documentaries accompany this exhibition, which are shown in the auditorium upstairs. They are “Ink,” made in 1964, in which Pierre Alechinsky, Karel Appel, and Ting appear; and an untitled short by Japanese calligrapher Hidai Nankoku, a friend of Ting’s. Together, the films run about half an hour.

Discussions of one hour in duration will be held on the life and work of Walasse Ting on January 24 and February 7. No reservations are needed. A catalogue is available for 39.90 euro. Note: Suitcases and backpacks are not allowed in the museum.

And while you’re there…

The Musée Cernuschi is located on the edge of Parc Monceau, so while you’re there, it’s worth taking a walk through this lovely park. To get there, just turn left outside the museum.

The park was established in the 18th century by a rich cousin of King Louis XVI. While the park is at its most splendid in spring and summer, even in winter you can appreciate the wide paths that take you around the Corinthian colonnade, which partially encircles a small lake, and the six Belle Époque monuments to prominent French writers and musicians. 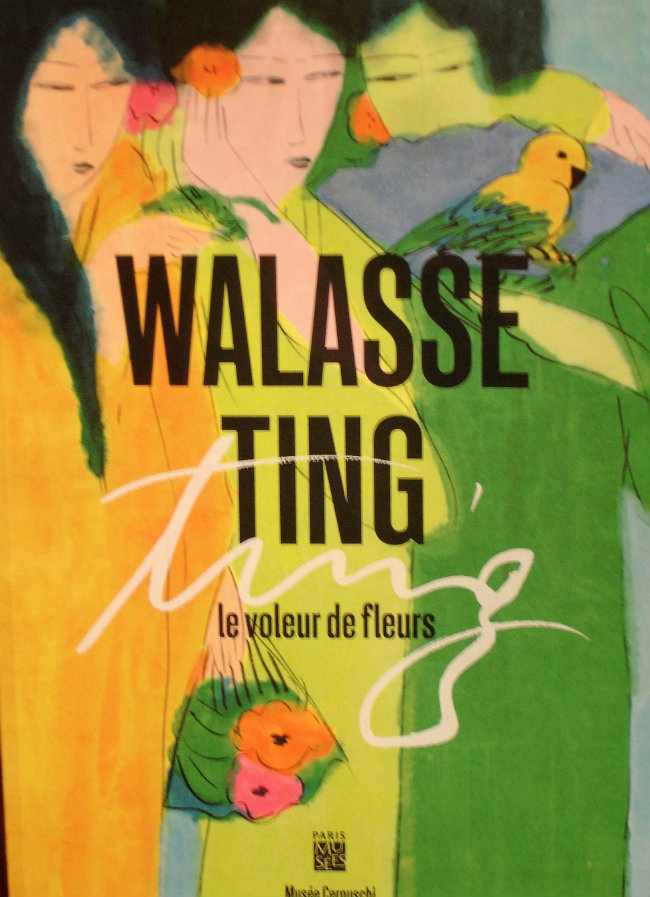 Walasse Ting at the Musée Cernuschi