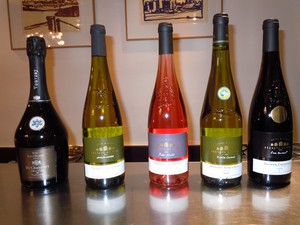 Ten years ago when William Ledeuil launched Ze Kitchen Galerie, his fresh, bright Asian-inspired dishes exploded onto the Paris foodie scene. Impossible to get a table in his loft-style space that once fed RATP workers, and guess what? Ten years on, it’s still the same story. Cédric Maréchal, the directeur de la salle (and also partner in the KGB annexe) is still fielding pleading callers, politely, with all the grace of a perfect maître d’. There are still plenty of chefs, from the four corners of the earth, working with focused dedication in the glass box open kitchen.

“Looking at food as an artist looks at his canvas, my cooking’s all about the emotion of taste and colour, balance and simplicity,” he said one day last week at a lunch to showcase Secrets de Chai, Loire Valley wines.

Secrets de Chai are part of Alliance Loire [1]. The group comprises seven cooperatives who joined forces in 2001, read a support line, so the vignerons could draw on the expertise of each other. Alliance Loire spans almost the length of the Loire, with appellations including Muscadet, Saumur, Bourgueil, Vouvray & Chinon. Ledeuil is particularly fond of Secrets which goes beautifully with his food because of its minéralité, its balance and longueur en bouche.

Ledeuil, a pupil of Guy Savoy, born in 1964 in the Loire Valley, chopped up his first sheep, aged 14, in the butcher shop where his father worked and where Ledeuil worked in the holidays. “We were not wealthy so we got the cuts nobody else wanted to eat,” he recalls. Casseroles were the order of the day chez Ledeuil. “We would prepare them before we left in the morning; they would slow cook all day,” he recalls.

Not having the money for a formal training, Ledeuil did work experience. His father clipped an article from Le Parisien newspaper about Ecole Ferrandi and their two-year courses of formation and gestion d’un restaurant. Ledeuil applied and was accepted. Ferrandi sent him off to a gig chez Guy Savoy, rue Duret in the 16th arrondissement. Le Carré de Feuillants, chez Dutournier followed. And then, Guy Savoy moved to rue Troyon and offered Ledeuil a post. “It was hell. I was the most inexperienced, the target for everyone’s angst,” he admits. “Only when they put me with the meats and I showed the skills learned from my father did things improve and I earned a bit of respect.”

National Service was spent “mostly making sorbets” for receptions given by Laurent Fabius, the then-President of the Assemblée Nationale. He returned to Guy Savoy as chef at Savoy’s Bistrot de l’Etoile. Next came Les Bouquinistes where he created his fusion cuisine. “It all began with a few drops of peanut oil on, say, a farci de radis noir et thon mariné, a touch of fresh ginger on a tartare de bar, un duo ciboulet et curry sur un volaille grillé. I felt freedom as I experimented with these flavours.”

Since the 2001 opening of Ze Kitchen Galerie, together with his adjoint Nicolas Houlbert, they’ve widened the frontiers of the French culinary universe. “I opted for a kitchen/workshop/gallery atmosphere, because I like to see the people I’m cooking for,” he says.

You get the feeling with Ledeuil (who has one Michelin star) that this is just the Zors d’Oeuvre, he says, “the most difficult awaits”. One thing is certain: you’ll leave either of his two addresses feeling happy, well fed and longing to return.

Read and Cook with: 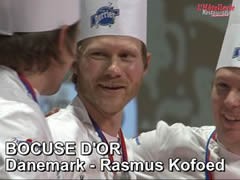 It’s third-time lucky for the Dane Rasmus Kofoed. In 2005 he took Bronze, in 2007 Silver and this year he wins La Bocuse d’Or and €15,000. He’s head chef and co-owner of Geranium [3], Copenhagen where “thoughtfulness can be tasted.”  Winning the culinary Olympics is no mean feat—the 25 chefs train like athletes, putting all else aside. Unlike many athletes they don’t seem to do it on drugs. Tillykke kok!

The delightful and talented Cyril Lignac [4] transformed Le Chardenoux into a modern brasserie, and now he’s about to do the same to the Left Bank 1950s classic Claude Sainlouis. It’s closing on 15th February for travaux, so if it’s one of your faves get yourself over there right now. And watch this space for news. 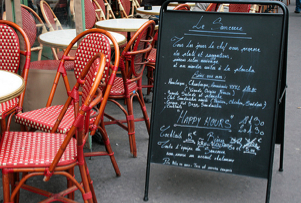 Our partner, Context Travel, has a guided walk we think you might enjoy . .