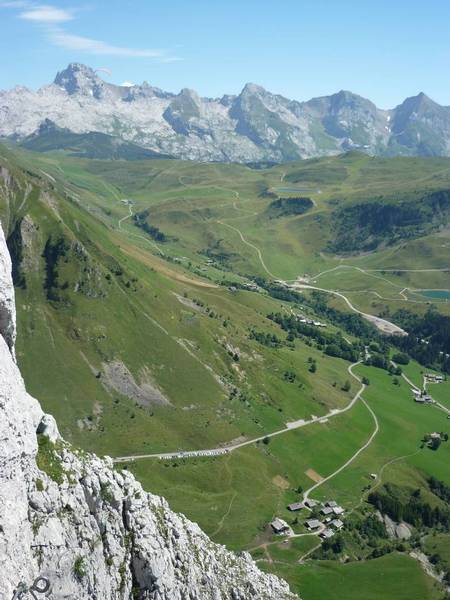 In 2011, I’ve vowed (once again!) to conquer my fears, such as talking to strangers on the phone and standing up to snotty waiters. Last year, I had a similar list of fears—many involving blood or the telephone—not all of which I have successfully banished. I did, however, do one thing that I swore I would never be able to do: I successfully completed a via ferrata route in the French Alps, and lived to tell the tale. Although it still makes my palms sweat just to think about it.

While the concept is relatively new in the United States, via ferratas have been popular in Europe for decades. Mountain climbing for those who lack the technical chops and equipment, via ferratas are mountain routes through isolated mountain areas that would be otherwise off-limits to all but experienced climbers.

Via ferrata climbers wear a traditional climbing harness fitted with a special V-shaped lanyard attachment with a carabiner on each end. The route is equipped with an iron cable bolted into the rock face at regular intervals. Climbers attach both carabiners to the cable, unhooking them one by one each time they reach a bolt, progressing along the route with the help of built-in rungs, ladders, steps, and suspended bridges.

The first via ferratas (also known as klettersteig) were created in the Dolomites during World War I to aid the mobility of troops stationed in the mountains. Today, via ferrata routes can be found in many European countries, with over 120 in France alone. Some via ferrata routes require little or no technical skill, while others demand a good dose of physical strength, climbing experience, and a serious appreciation for heights.

Although I consider myself an athletic and adventurous person—enthusiastic about roller coasters, rope swings, cliff jumps, and off-piste skiing—I am not entirely comfortable with the idea of dangling off the side of a mountain with only my own dexterity to save me. Despite months of prodding from friends, I hesitated long and hard before attempting a via ferrata, protesting that this was not a leisure activity but any reasonable person’s nightmare.

My pride and curiosity eventually got the better of me, and on a recent trip to the French Alps, I finally caved in. Ignoring the quaking feeling in my knees (and the possibility that I would have to be helicoptered out of there), I headed to Sixt Fer à Cheval, a picturesque little town about an hour between Geneva and Chamonix. Named one of “The Most Beautiful Villages in France,” Sixt is a popular ski destination in winter, and in summer hikers, rafters, and climbers flock to the Sixt Natural Reserve (the largest in Haute-Savoie) to explore Sixt’s famous horseshoe-shaped valley crowned with waterfalls.

In France, via ferrata are rated on a system ranking from F for facile, or easy, to ED, extremely difficult. The route at Sixt is described as “rather difficult to difficult,” or doable for able beginners accompanied by a guide. Equipped with climbing harnesses, cables and carabiners (all rented for less than 10 euros), we head for the trail. A steep ten-minute walk in the woods brings us to the beginning of the via ferrata. We strap on our harnesses and connect the two carabiners to the cable. For the moment, I’m feeling confident: the trail is rocky, but the cables aren’t really necessary yet. 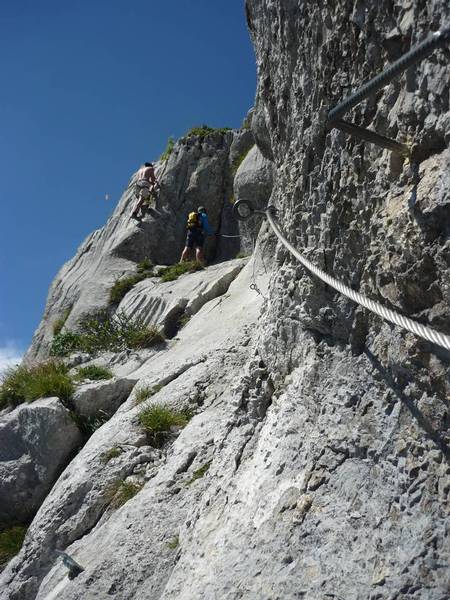 As soon as I’ve gotten used to it, however, the real climbing begins. We round a bend and the ground drops away on one side, and the path heads straight up the rock face. My palms start sweating profusely, but I grab the next iron rung and start climbing.

The climb is more technical than I’d hoped: while in some places the route is as straightforward as climbing a ladder, I soon find myself pulling, twisting, stretching and grasping for the next rung or crevice, and, above all, trying not to look down. “How are you feeling?” asks my climbing partner. “Fine,” I reply through gritted teeth, but my violently shaking limbs give me away.

As we continue along the route, I begin to grow more confident in my climbing abilities. When, after having reached a ledge with a glorious view of the valley, I see the cable disappear straight down the cliff, I hardly hesitate, only to find myself clinging from an overhang, my feet stretching and scrambling to find a hold. At another moment, scaling a ladder, my hands slippery with sweat, a jet plane roars over the top of the mountain, seemingly inches above our heads.

When I can control the shaking in my limbs, I stop to marvel at the experience: here I am, on a sunny day in early September, high in the mountains of Haute-Savoie, clinging to a sheer rock face. I brave a glance downward at the gray, frothy river etched into the valley hundreds of feet below, and am filled with a mixture of pride, panic and exhilaration. Surveying my next move, from a precarious foothold in the rock to a narrow, swinging footbridge, I feel a bit like Indiana Jones, or at least like one of his feckless blond girlfriends.

By the time I’ve finally “adjusted” to the high altitude (or, rather, grown accustomed to being constantly freaked out), the climb is over: one final scramble up onto a wide ledge and the via ferrata rejoins the hiking trail. We have completed the two or three hour course in an hour and a half, a testament not to our climbing skill but to my nervous determination to keep going. Now that the climb is over, I can appreciate how exhilarating the whole experience was; I may even try another course again sometime. This year, however, I’ve set out to conquer another domain that makes my palms sweat: French bureaucracy.

For more information on via ferrata routes in Haute-Savoie, visit the Chamonix Rock Climbing Ferrata site [1].

Sadie Nachtigal is an editor and writer for Bonjour Paris. She is also a contributing writer at Suite101 [2].

If you’re in Paris, some of Bonjour Paris’s favorite tours are:

Medieval Churches of Paris [3]: Discover some of Paris’s most beautiful and lesser-known churches in the company of a medievalist, a perfect theme for the holiday season.

Louvre French Masters: [4] Escape the cold and the crowds in the Italian wing of the Louvre by learning about the evolution of French art from the late Gothic period to the monumental 19th century paintings of David and Delacroix, accompanied by an art historian.