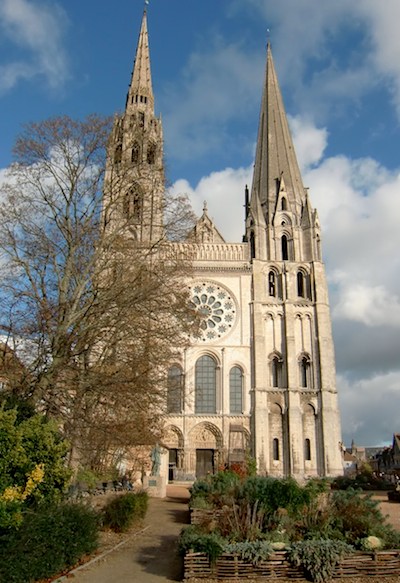 The Cathédrale Notre-Dame de Chartres [1] (Our Lady of Chartres Cathedral) is one of the largest cathedrals in France. It is a French national monument [2] and also a UNESCO World Heritage site [3]. The cathedral has had only one minor architectural restoration since the 13th century—the cathedral itself was built between 1193 and 1250. Nearly destroyed in a fire in 1194, many consider it a miracle that some religious artifacts survived. 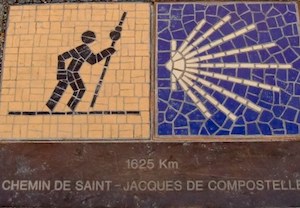 Today Cathédrale Notre-Dame de Chartres is a popular destination for tourists and modern day Christian pilgrims alike who go to the cathedral to see the Sancta Camisa [4] relic, said to be the tunic worn by the Virgin Mary at Christ’s birth. Look carefully in the city’s pavement to find the famous pilgrim and clam shell signs to guide your way.

The Chartres labyrinth [5] on the sanctuary floor is another fascinating feature that draws people to the cathedral. Labyrinths have moved from myth to decorative symbology throughout the ages. In Greek mythology the labyrinth [5] was built by the legendary inventor Daedalus (father of Icarus) for King Minos of Crete. Its function was to contain the Minotaur, a mythical half man half bull creature. Daedalus made the labyrinth such an elaborate structure that even he could barely escape it. There is great speculation about their true purpose; other than decorative, labyrinths were used as patterns for ritualistic dances and as a means to replicate pilgrimages. 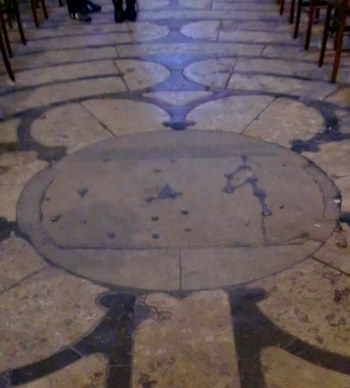 During medieval times (from the 12th to 14th centuries) labyrinths were literally designed and built into the floors in the grand cathedrals of northern France, most notably at Chartres, Reims [6] and Amiens [7]. The labyrinth at Chartres is well preserved and well known for its stunning appearance and condition. Chairs are removed from the sanctuary floor only on Fridays to allow visitors to follow its circular path.

The cathedral and Chartres nearly did not survive World War II. The majority of the cathedral’s original stained glass windows are intact, partly because they were removed in 1939 just before German armed forces invaded France. Over the course of several years the precious windows have been under restoration. It is a slow and laborious process, with only two windows per year restored at great expense and effort.

Welborn Barton Griffith, Jr [8]. is an American credited with saving the cathedral and for heroic acts that led to the Allies overcoming German troops based in Chartres in World War II. The Germans occupied Chartres in 1940 and they converted a small Chartres airport as a Luftwaffe military airfield. US Army Colonel Griffith was part of an army operation that was advancing on Chartres when they encountered artillery fire from the Germans. Allies believed the Germans were using the tall Chartres Cathedral Tower (one of the tallest in France) as a lookout base and soldiers were shooting artillery shells at the cathedral per orders. Colonel Griffith volunteered to enter the cathedral to see if the Germans were actually inside. On August 16, 1944, Colonel Griffith and another soldier found the cathedral unoccupied and orders to bomb the cathedral were cancelled. Griffith continued to search the area and he encountered Germans less than two miles north of Chartres in the village of Lèves. After a gunfire exchange, he returned to the Allies to alert them, armed himself and directed a tank to the Germans. It was there that he died after being shot by the enemy near Lèves. Days later on August 21, 1944, Allied forces liberated Chartres from the Germans. Colonel Griffith was awarded the prestigious Distinguished Service Cross (Posthumously) and Silver Star medals [8] “for extraordinary heroism in connection with military operations against an armed enemy while serving as Operations Officer.” 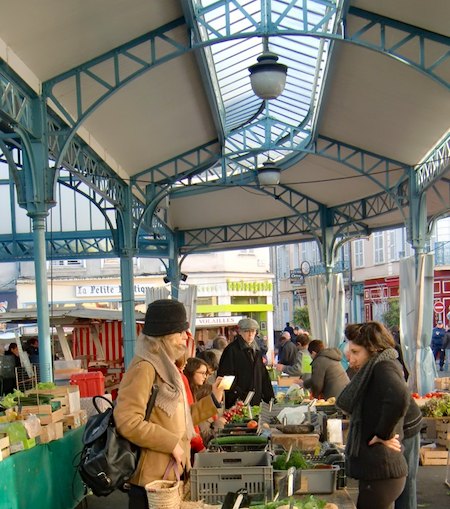 In today’s Chartres, we find a beautiful, covered marketplace near the cathedral at Place Billard [9]. This food market is open on Wednesday and Saturday mornings and offers a beautiful space for the local farmers to sell their produce along with a wonderful assortment of fresh meat, poultry, breads and prepared specialties such as the well-known game pies of Chartres. On Tuesdays, Thursdays and Saturdays there is a flower market at Place du Cygne. 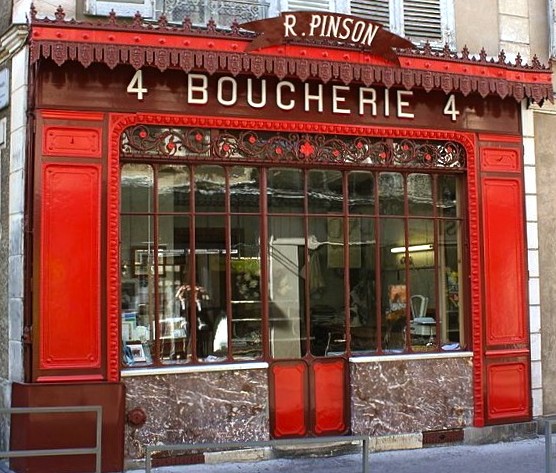 Another Chartres historic monument is nearby at 4, rue Soleil d’Or is La Boucherie Pinson [10], owned by the same family since it moved to this location in 1892. It has the same marble walls, a vast selection of meat hooks, beautiful tiled flooring and boasts no renovation since its opening. A fifth-generation member of the Pinson family continues to work and service its clientele. In 2006, the building was designated a national historic monument [10] so that this last remaining, totally intact boucherie—a meat market for all meats except pork—will remain for us to admire and patronize. If you can speak a bit of French, Monsieur Pinson will be happy to reminisce with you about his family business.

Not too far away is rue des Ecuyers—a delightful street to visit with its half-timbered houses with sidewalks lit by lanterns suspended on chains and visitors are plunged back into medieval times. Winter’s shorter daylight hours are the perfect time to visit rue des Ecuyers.

Chartres has about 42,000 inhabitants and while best known for its famous cathedral it also has several museums:

The city center is pristine with pedestrian-friendly streets, lovely cafés, shops and restaurants.

Best of all, Chartres is located 50 miles southwest of Paris—a little more than an hour by train from Gare de Montparnasse [16]. The roundtrip fare averages only 23€ and you are whisked comfortably to Chartres for a day or a weekend of enjoyment. Bon Voyage!

To reach Chartres historian Malcom Miller to arrange a private tour in English:

Entry: 7€ fee to climb 300 steps to top of the North Tower; under 18 free. Free for all first Sunday of every month.

Loui Franke [24] is a Paris resident and the author of Parisian Postcards [25]. Please click on her name to learn more about her and to see other stories by Loui published by BonjourParis.

Plan your visit to Chartres, whether armchair or actual….click on image for details. 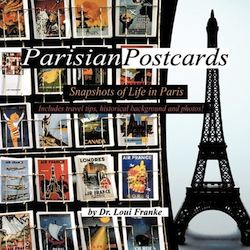